Climate Change Is Real Folks (And We're Doing Something About It!) Part 2 - The Tree Report If you read our previous post, you’re well aware that climate change is not a distant threat to humanity, but a process that is currently devastating communities and regions around the world. “Hey, where’s the good news?!” You ask. As we promised, there is evidence-based hope to reverse trends of rising carbon emissions and bring atmospheric carbon dioxide (CO2) levels back down to a level safe for humans and our non-human pals to thrive for decades, if not centuries, to come.


That optimism stems from the release of a new report published in the journal Science, called “The global tree restoration potential,” which says that a solution to our dangerously high CO2 levels is, drum roll please… to plant more trees! How many trees? So many trees, you wood not be-leaf it.

The study, conducted by researchers at the Swiss university ETH Zurich, found that Earth currently has enough suitable land to increase global forest coverage by one-third without disrupting existing societies. The study’s co-author and ecologist, Tom Crowther, said, “Our study shows clearly that forest restoration is the best climate change solution available today.” But don’t just take his word for it, there’s even more compelling evidence that trees are badasses when it comes to defeating climate change.


Allow us to take a moment to reflect back on an important process we learned about in elementary school: photosynthesis. The term photosynthesis means “putting together with light,” and is the process that happens within plant cells to take in carbon dioxide from the air via leaf pores and combine that CO2 with water, oxygen and nitrogen to form a type of sugar (glucose) that provides plant nourishment. In other words, photosynthesis is the conversion of light energy, CO2, and water into plant food and oxygen. If you feel like nerding out (and we know that you do), here’s the equation for photosynthesis:


Photosynthesis is the most important function of trees, because the oxygen released by trees (and other plants) contributes nearly all the oxygen in the air that we breathe!


At about 10 years old, trees reach their most productive stage of carbon storage and can consume 48 pounds of CO2 per year, while releasing enough oxygen for you to breathe for two years. Thanks, trees!

More than half of the potential to restore trees exists in just six countries, and the US made that list. The countries and their reforestation potential includes Russia (at 151 million hectares), USA (103 million), Canada (78 million), Australia (58 million), Brazil (50 million), and China (40 million). These countries are particularly strong candidates for reforestation because of their large land masses, and the fact that they have already removed so much of existing forests, according to lead author Jean-Francois Bastin.


The Many Benefits of Trees


In addition to the vast potential to absorb excess CO2 from the atmosphere, there’s a long list of other benefits that trees provide for reducing the impacts of climate change. Trees and other plants can reduce the “urban heat island effect,” lowering surface and air temperatures in cities by providing shade and evapotranspiration. The US Environmental Protection Agency states that the shade of trees can reduce peak surface temperatures by as much as 20-45 degrees Fahrenheit compared to unshaded areas.


That means huge savings for your wallet, but also reduced carbon emissions from the electricity used for heating and air conditioning. When trees cast shade on buildings, they can reduce internal temperatures up to 10 degrees F and reduce air conditioning costs of detached houses by up to 35%. But those benefits don’t end when the seasons turn cold. Trees also provide windbreaks around buildings to reduce heat loss up to 50%. So the more trees that are planted around our homes and buildings, the less electricity we’ll use. That’s important because in 2018, about one-third of total U.S. energy-related CO2 emissions came from the generation of electricity. 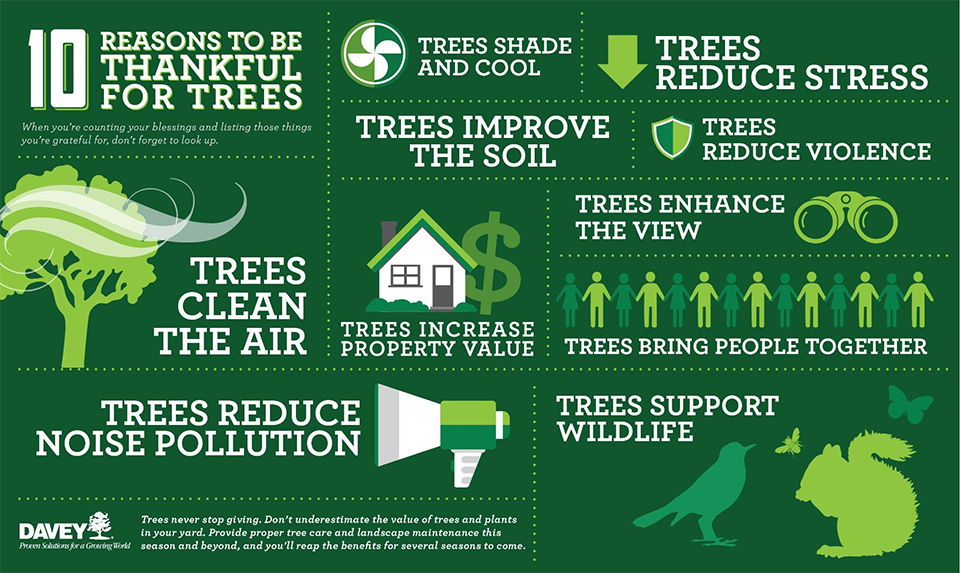 Trees also contribute to improved air quality by removing air pollutants and storing CO2, diverting rain from overburdened stormwater systems and improving urban water quality, slow soil erosion and reduce urban flooding, serve as a habitat for birds and other species, can reduce noise pollution, and provide natural beauty and mental health benefits for all of us!


Clearly there are plentiful reasons to plant more trees ASAP. And we have the space to do so: the earth has enough existing parks, forests and abandoned land to plant 1.2 trillion additional trees. If we did, the result would be “at least 10 years of anthropogenic emissions completely wiped out...this could cut carbon dioxide in the atmosphere by up to 25 percent, to levels last seen almost a century ago,” says Crowther.


But we must act fast. The report states that if global temperatures increase by 1.5 degrees Celsius, the potential area for forest restoration could drop by a fifth due to temperatures being unsuitable for some tropical forests. Deforestation remains a major problem in regions where the carbon-storing capacity of trees is especially critical. For example, recent reports show that deforestation is accelerating under the current Brazilian government, amounting to a football-sized field area of forest being cleared every minute.


Luckily, there are people and organizations tirelessly working to restore degraded lands, reduce deforestation, and plant enough trees to offset the effects of climate change. We’d like to introduce you to one incredible organization focused on global reforestation around the world.

Founded in 2014 by Matt Hill, One Tree Planted is a non-profit environmental charity that works with reforestation partners in North America, South America, Asia and Africa to plant trees to restore forests, create jobs, build communities, and protect habitat for biodiversity.


Their M.O. is simple: One dollar. One tree.


One Tree Planted is dedicated to making it easier for individuals and businesses to give back to the environment, fight climate change, protect biodiversity and contribute to reforestation around the world. Donors can choose a project to fund within each of the four regions, then the donations for each reforestation project are pooled and sent to OTP’s local partners, who choose the ideal tree species for their ecosystem and climate.

After planting, One Tree Planted sends out a report to each project’s donors, sharing the impact of reforesting on the health of the local environment, economy and community.


Since 2014, OTP has planted more than 2.5 million trees. In 2018, the organization surpassed their previous annual record and put 1.3 million new trees in the ground!


We are proud to announce our recent partnership with One Tree Planted! Every time you buy a plant from Desk Plants, we donate $1 to One Tree Planted. Everytime $1 is donated, one tree is planted around the world.


Stay tuned for the third installment of this series to learn more about our mission and why we chose to partner with One Tree Planted.